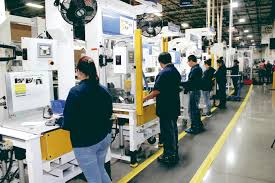 The 250,000-square-foot facility, known as Daimay Plant 2, manufactures sun visors for the interior of passenger vehicles. The $10 million plant currently employs 300 people and could expand to 750 workers.

The Shanghai-based company also announced plans for a third plant in Ramos Arizpe. The third plant is currently under construction and scheduled to be completed around February, according to company officials. The amount of investment and job openings for the third plant has not been disclosed.